Juno is the Alpha of the Arctic Wolves. Juno was first seen as a statue at the AJ Birthday Party and has yet to make an appearance in the Adventures. On August 16, 2018, the Jamaa Journal revealed the Arctic Wolf statue in the Temple of the Ancients to be Juno themself, turned to stone as the result of years spent trapped in the Temple.

Juno is a thick-furred, muscular arctic wolf. They have strange rectangular-like markings all over their body and eye patches on each side of their face that resemble black eyeliner. They have gentle, slightly squinted, pure white eyes and a long snout with a rectangular nose. 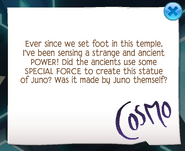 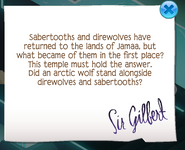 Juno's story of how they sacrificed themself to save Balloosh. 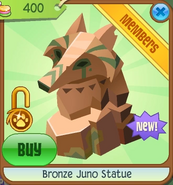 The Hidden Juno Statue, which is obtained by redeeming the code "Juno".

The symbol in the Jamaa Journal with Juno in armor.

The symbol in the Jamaa Journal with Juno. 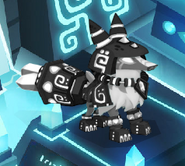 The Ancient Armory statue that changed to match Juno's markings