Liza is the female Alpha of the Pandas and the chief leader of the Alphas. She is an adventurous explorer and normally comes across new lands including Coral Canyons, Mt. Shiveer, and Appondale. She formerly greeted jammers when they first joined Animal Jam, however, it was later updated to Peck. She briefly appears in several adventures, as a major character.

Liza is the Panda Alpha who stands upright on her hind legs. She has bright neon purple eyes with long eyelashes. However, the original Liza simply had dark circles for eyes along with pale fur, as well as dark shading around her eyes, and pink squares right beneath them. She has a triangular black nose. Her ears sit on top of her head, with gray swirls in the middle, and almost looks like a part of her hair. Also, three aquamarine earrings dangle from each ear. Her hair is in a long braid that falls down her back. She wears an aquamarine dress with a golden lining, which is connected by lace at the neck. and a jewel-encrusted belt. She wears black gloves and has a golden ribbon tied around her right ankle. She also has a golden toe ring on her right foot. She normally carries a long wooden staff. Over time, Liza went through a make-over. Originally, she was quite bigger and looked older. But today, she is thinner and has a younger-appearance.

It is noted by the Animal Jam Insider's Guide that she along with the other six original Alphas (not including Peck), came from Earth. It is most likely that she lived in China, which is the only place where Pandas live in the wild. Liza was probably found by Mira and Zios and was asked to be an Alpha because of her personality and nature. It is noted by the Daily Explorer that she traveled to Jamaa by foot, instead of accepting a ride from Mira.

Greely's Inferno: She appears at the end of Greely's Inferno where she admires Greely's bravery of saving Jamaa and congratulating the Player on their help. Liza also seems to be more upset than the other Alphas about Greely's believed death.

The Search For Greely: She appears again in The Search For Greely, where she ambushes Greely along with Cosmo and Graham. She tells the Player to watch out since Greely could turn on any of them. Unlike Cosmo and Graham, Liza seems hurt by Greely's alleged betrayal and doesn't accuse him, nor insult him. When Greely brings up the Phantom beacon she seems horrified and appears to be anxious. After the adventure has ended, if she is spoken to again, she says she hopes Greely is alright.

Bubble Trouble: She is seen at the beginning and end of Bubble Trouble, where she asks the Player to explore underwater and rescue the Dolphins. At the end of this adventure, she finds out about the Phantoms making a factory to either reproduce Phantoms or create weapons to use against Jamaa. She looks utterly terrified and complains about it wildly.

In Too Deep: Liza appears yet in another underwater adventure called In Too Deep where she assigns the Player to explore the Phantom Factory. She appears at the end of this Adventure congratulating the Player and then exclaims in shock about the Player mentioning Tavie. She explains who Tavie is before In Too Deep ends.

Turning The Tide: Liza only appears at the end of this Adventure, where she thanks the Player for rescuing Tavie. Along with this, if spoken to again, she mentions how brave the Player is.

The Trials of Zios: Liza appears at the beginning of the adventure with Sir Gilbert, and gives a player an introduction to the adventure.

The River's Heart: She appears at the end with everyone else.

Teleportation- Liza has the ability to warp from one location to another like the other alphas. When she teleports, a big pink flower wraps around her.

Alpha Staff- Liza uses her alpha staff to fight phantoms. The ability of this staff can be seen in more details in the Animal Jam book series.

Liza, as she appears in various adventures.

Liza, as she appears when AJ is down for maintenance

Liza, as she appeared in the old introduction for New Jammers. 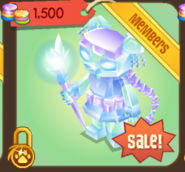 Liza appeared in the Jamaa Journal.

Info about Liza from Alpha Headquarters. 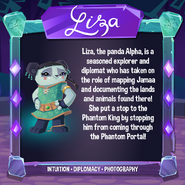 Information about Liza in The Daily Explorer. 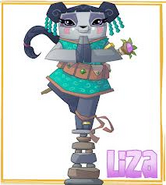 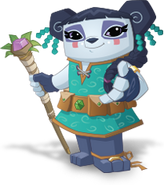 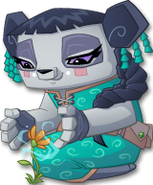 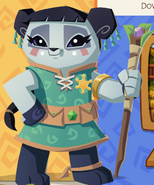 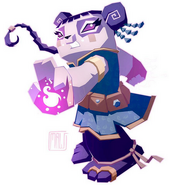 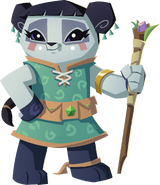 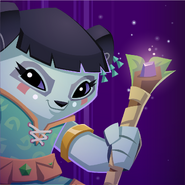 Artwork of Liza in The Daily Explorer. 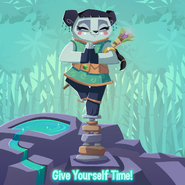 Liza in The Daily Explorer
Community content is available under CC-BY-SA unless otherwise noted.
Advertisement