View source
Not to be confused with the Horse Coin, the Charm Token, or the Magic Coin.

450 Gems
The Masterpiece Token is a non-member den item that was first released starting in March 2017 as a promotional item. It can be obtained by redeeming a code included with the Animal Jam Sketchbook from the company Make It Real. It was also given out to all Jammers on the 6th and 14th day of the 2017 Jamaaliday Gift Calendar. It returned in July 2018 as part of the Artist's Dream Bundle that gives 5 Masterpiece Tokens when redeemed.

The Masterpiece Token is a silver, coin-like disk that has a dark blue circle on the center. Printed on the front of each side is a golden picture frame with shiny, light-blue glass set inside it to resemble a Masterpiece. The coin is floating above the ground and has a constant spinning animation. There is only one variety. 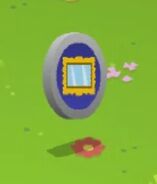 The rotating effect when placed in a den. 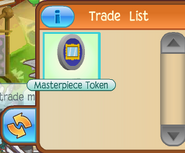 Enough tokens placed in the same spot give a darker shadow effect. 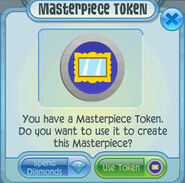 The dialog to use this item when creating a Masterpiece.

The message non-members receive when the Masterpiece Token gets refunded
Community content is available under CC-BY-SA unless otherwise noted.
Advertisement