90 Gems
740 Gems (Rare Item Monday)
The Mech Angel Wings are a non-member land clothing item that are worn on the body and were released sometime during 2012. They can be obtained as one of many random prizes in Sky High and from many of the Adventures.

The Mech Angel Wings consist of two small, colorful wings with a harness in between them to attach them onto the player. This item has nine varieties, one of which is a rare variant.

The Mech Angel Wings can be won as a possible prize from the following locations: 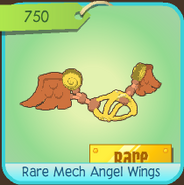 The appearance of Mech Angel Wings before updating to the current appearance.

All varieties of Mech Angel Wings as seen in a player's inventory.

The glitch when worn by a playing Lynx. 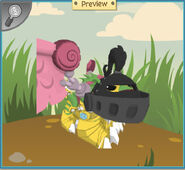 A glitch where a part of the wing is cut off
Community content is available under CC-BY-SA unless otherwise noted.
Advertisement