Similar to the New Year's Party 2017, the party takes place in the Snow Fort den, which includes two ice slides, a bridge, and various shops to purchase items. Two frozen towers can be seen on the second floor connected together with a wooden bridge. From there, occasional fireworks can be seen shooting into the sky as freezing winds blow around as from the previous New Year's Party.

This party is much like the New Year's Party 2017 as much of the shops and attractions are the same. There are three individual shops that sell music-playing items, clothing items, and den items. Some of those items that are for sale are different than items sold in years past such as the New Year's Mask. More attractions include carvings in the wall that can be clicked to carry around various holdables such as a slice of cake, a lollipop, as well as a snowman. Jammers can also stand atop the fort where they can visibly turn a light bluish color presumably due to cold winds. The music playing is the same as the one that plays in Jamaaliday Rescue. 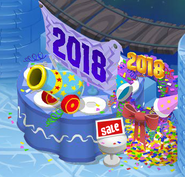 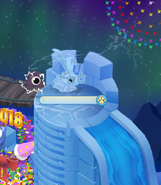 A bunny becoming blue by the wind.

The snowman where you can get the Snowman Holdable Icon.

The cake where you can get the Cake Holdable Icon.

The lollipop where you can get the Lollipop Holdable Icon.
Add a photo to this gallery