990 Gems
The New Year's Party Hat is a members-only land clothing item that is worn on the head. It was the Monthly Member Gift for January 2012.

The New Year's Party Hat is shaped like a tall cone with several stripes on it and animated confetti coming out of it. It also has a small tuft of confetti at the very top as well as on the bottom edge. This item comes in eight different color varieties. 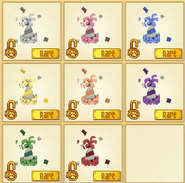 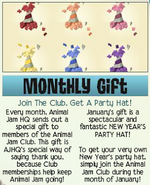 This item announced in the Jamaa Journal.

A glitch where an unreleased variant appears when worn on the Fox.