For the shop found inside this party, see Penguins Only Shop.

The Penguins Only Party is a winter-themed party that is available to members and non-members. It was first introduced on June 21, 2012, and only Penguins can attend it.

The Penguins Only Party takes place on a large iceberg in an ocean during the daytime. The iceberg has two ice slides cutting through it that resemble the ice slide found in Mt. Shiveer. Ice stairs that lead to the very top of the iceberg are carved between the slides. The base of the iceberg has a snow pile on the left side and an icy pond of water on the right side. 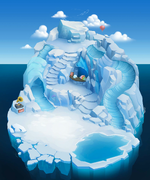 At the top of the iceberg, Jammers can ride the ice slides or stand in the wind above the penguin ice carving to chill their animal with a light blue tint. There is also a hot air balloon visible from the top of the iceberg which Jammers can click on to carry around a miniature Holdable Icon version of the balloon. This party has two shops: a music shop located at the base of the iceberg and a den item shop that can be found halfway up the ice stairs. At the bottom of the slides, there is also a snow cone ice carving that Jammers can click on to pick up a colorful snow cone Holdable Icon that can then be carried around the party. The possible snow cone colors are blue, green, red, and yellow. Near the bottom left of the iceberg, there is a small ice shelf that Jammers can walk on causing it to break apart; the more Jammers walk on it, the further it will separate, much like the bridge in Coral Canyons.

Retrieved from "https://animaljam.fandom.com/wiki/Penguins_Only_Party?oldid=1322573"
Community content is available under CC-BY-SA unless otherwise noted.