750 Gems
3,475 Gems (Rare Item Monday)
The Phantom Mask is a members-only land clothing item that is worn on the head. It is sold at Epic Wonders during the Night of the Phantoms and was first released on October 19, 2012.

The Phantom Mask is a large Phantom mask which covers the whole head. When worn, lightning bolts emit from the mask, like real Phantoms, and the large, single pupil can be seen darting from side to side. This item comes in only two color varieties, including the Rare Item Monday variant. 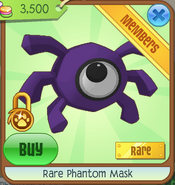 The Rare Item Monday version advertised in The Daily Explorer.
Add a photo to this gallery
Retrieved from "https://animaljam.fandom.com/wiki/Phantom_Mask?oldid=1469381"
Community content is available under CC-BY-SA unless otherwise noted.