October 31st
The Phantoms are the first and only major antagonists in Jamaa. For unknown reasons, they terrorize Jamaa and all of its inhabitants. While it is unclear where they originated, Phantoms made their first actual appearance in the game as part of the broken Zios statue in the Lost Temple of Zios. Once the statue was restored, Phantoms stopped spawning from it.

Phantoms come in a variety of shapes and sizes with a few common features. They are usually a pitch black, circular blob with a single, large white eye that has a small black pupil. Phantoms also tend to have tentacles that stick out from different sides of their body.

These are slightly small creatures with six or more tentacles. When approached by an animal, they produce a blue-white electric arc in an attempt to shock the animal.

These are much smaller than regular Phantoms, only being the size of Pets. Instead of regular tentacles, they have one or two small black plump tentacles on the right or left side of their head. When approached by a Pet, they become scared and attempt to flee.

These are small creatures with eight small black plump tentacles on the top and bottom of their head. When approached by an animal, they attempt to slam down and crush the animal.

Phantom Kings are much bigger than regular Phantoms. They have violet-purple round spots around the bottom half of the body and a cracked-looking set of spikes on the head, like a crown. When approached by an animal, they float up into the air and slam back down into the ground in an attempt to stun the animal.

The Phantom Goop appears to be large, slug-like goop piles with violet-purple outskirts. They have one large eye in the middle which is followed by three much smaller eyes.

The Phantom Coral is an unusual type of phantom that consists of a blob with many sharp spikes in an irregular shape. When touched by an animal, it will produce a white electric arc in an attempt to shock the animal.

The Pet Phantom is a friendly kind of phantom that seemingly only wants to be loved. This is the only phantom with good intentions and the only non-animal pet.

A Phantom Spitter is a strange type of phantom that first appeared in Storming The Fortress. It is a phantom that looks similar to a plant. These phantoms spit out purple spiked Boomseeds.

The Phantom Sprouter looks like a very old pipe ruin, with rotten plants growing out of it. Phantom Sprouters can appear out of almost nowhere, taking the player by surprise. They spawn about one Phantom every few seconds, with seemingly no limit. This can actually get very out of hand if the Phantom Sprouter is not destroyed quickly. A Phantom Sprouter can be defeated using one boomseed. However, sometimes the timer will lag out, causing another Phantom to be spawned directly during the destruction of the Sprouter.

The Phantom Pipe is a large purple pipe connected to the ground. It is often seen spewing out a purple liquid that is contaminating the environment or blocking a path. The player can destroy the Pipe by finding and putting a cork in it. In sea adventures, the player will need to find a valve to shut it off.

The Phantom Watcher looks similar to a Phantom with no tentacles, except without any movement. They stay perfectly still, hovering above a small prism. Their attack method is to use lasers shooting from their eyes. The lasers are a deadly one-hit-knockout, instantly sending the player back to the latest checkpoint if touched. The lasers are commonly used as for a puzzle effect, forcing the player to try to get past them in order to complete an objective. They can also be dodged by hiding behind a wall. Phantom Watchers cannot be deactivated from Chomper Plants or Boomseeds, but sometimes can be deactivated using a nearby switch.

The Phantom Lookout looks like an eye looking through a bulb. It casts a triangular beam of light across the walking path, and moves back and forth. If an animal crosses the beam, Phantom Webs appear, trapping the player inside, while 2 Normal Phantoms approach the player. The beam does go away in regular increments, or if an animal goes almost off-screen. However, if the latter happens, walking into range again will cause it the resume its beam. The Phantom Lookouts are currently only included in The Phantom Fortress and Storming The Fortress.

The Phantom Snare appears to be unseen by a player. When the player gets too close to it, the eyes will pop up and a thorn circle pops up. The player has the click on the thorn in the middle of the circle to get out. They were first seen The River's Heart. So far this is their only appearance.

The Phantom Watchtower looks like a lamp with a phantom in it with a red light on the top. It appears in the adventure The River's Heart. When the player gets close to it, the Phantom's eye will open and will surround itself with a green light. When a player gets into the light, the eye will look alerted, the light will turn red and will activate Phantom Watchers. It remains this way for about 13-19 seconds.

Appears as a normal chest at first, but when a player opens a Phantom Mimic Chest, it will turn purple and will spawn a phantom. The phantom then briefly seeks out a player, once it finds one, it the chest then vanishes.

According to the original legend, it was Mira who made the very first Phantoms, presumably from her tears. However, this story alone does not provide a clear explanation for what happened between Mira and Zios or how the Phantoms actually formed.

In a more recent story, the Phantoms are said to have invaded Jamaa from some other world. This suggests that only the companionship between Zios and Mira was lost, as both of them were still in Jamaa when the Phantoms invaded. It also suggests that the combination of Mira's tears and the elements of Jamaa somehow created an entirely new world where the Phantoms evolved, as they did not invade Jamaa initially.

It is unknown why the Phantoms came to Jamaa, but they cause destruction where ever they go. Their behavior of quickly spreading and imprisoning the other species suggests that they want control over Jamaa. This also provides an explanation for the initial lack of species in Jamaa, as most species were trapped by the Phantoms.

In their efforts to take over Jamaa, the Phantoms captured Zios and may have captured Mira as well. While it is not clear if this was part of the Phantoms' plan, removing the guardian spirits from Jamaa would prevent them from creating any more Alphas.

Meet Cosmo: In the Meet Cosmo adventure, the Phantoms terrorize a farm where Koalas live by polluting the waters and kidnapping farmers.

The Hive: In The Hive, the Player enters one of the Phantom bases. During the end, a Phantom King appears to tries get rid of the Player and the player must defeat the King to finish the adventure.

Greely's Inferno: The next adventure, they go ahead with the plan on destroying Jamaa only to be stopped by both Greely and the Player.

Bubble Trouble: In Bubble Trouble the Phantoms seem to be making a factory of some sort while kidnapping four Dolphins, which the player must free.

In Too Deep: The Phantom Factory is open, and the player must shut it down while freeing the 4 kidnapped sharks. The Phantoms begin to attack when the player starts to destroy their factory. At the end, it is discovered that the Phantoms captured the Dolphin Alpha, Tavie.

The Phantoms appear in all types of games in Jamaa, often being the villain of them all. They appear in games such as Falling Phantoms, Wind Rider, Fruit Slinger and Hedge Hog. They also appear in all the Summer Carnival games as targets.

They briefly appear at the start of Tunnel Town in the short animated video. The group of Phantoms try to kidnap a female Bunny but was stopped by the bunny's supposed lover. The biggest Phantom of the group creates a portal where the male bunny is teleported to another dimension. It is unknown if Phantoms can do this on the main game. They also appear in AJ Jump where they try to prevent the Player from going higher by striking them with their electricity.

There are a number of phantom-themed items that can be purchased. Many of these items are seasonal and available only during the Night of the Phantoms, but some others can be purchased year-round.

Phantom-themed costumes allow Jammers to dress up as a Phantom.

Despite their tendency to electrocute Jammers, Phantoms are sold in Jamaa. They come in a variety of cages, crates, pens, and cells and they are always animated. Each Phantom is securely locked up, so that they may not escape. 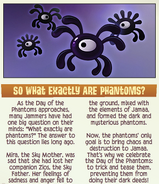 An explanation for the origins of Phantoms was part of Jamaa Journal Volume 16. 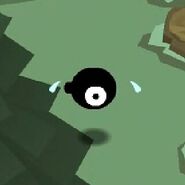 A phantom in a cage

A description of Phantoms in the Alpha Headquarters. 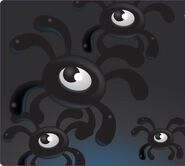 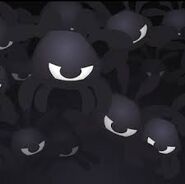 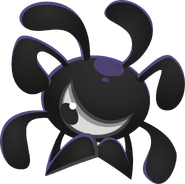 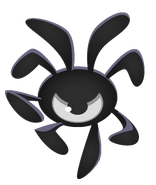 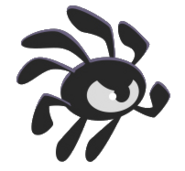 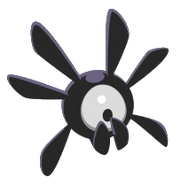 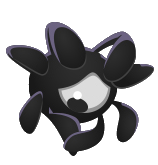 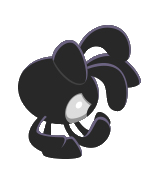 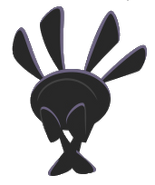 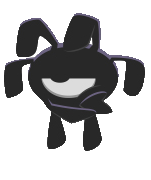 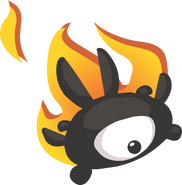 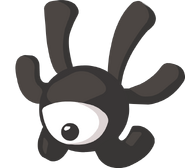 Phantoms with captured animals from Jamaa 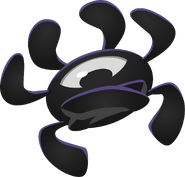 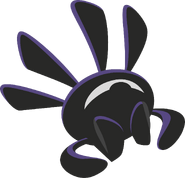 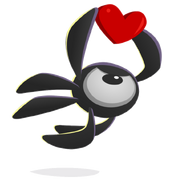 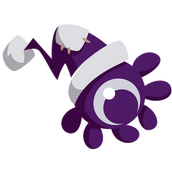 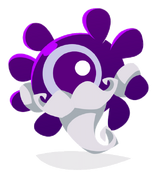 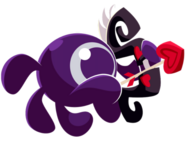 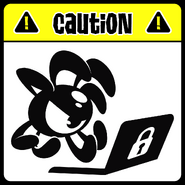 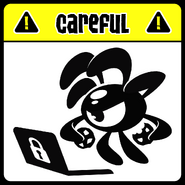 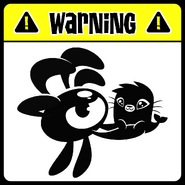