This is a set of golden boots that include sharp claws and anklets. One of the front claws has animated red flames flowing around it. This item has only one variety. 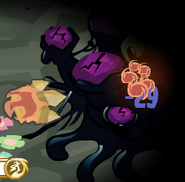 The attack animation and damage done.
Add a photo to this gallery
Retrieved from "https://animaljam.fandom.com/wiki/Phoenix_Leg_Armor?oldid=1254728"
Community content is available under CC-BY-SA unless otherwise noted.