The Pink Purse is a non-member land clothing item that can be worn on the leg. It was first released on December 31, 2011, as one of the 2011 Daily Jamaaliday Gifts.

Hence the name, the Pink Purse is a baby pink handbag with pale pink straps and pink-white buttons. The rare version is also pink, but it is a darker hue and has light blue straps. This item has only two varieties. 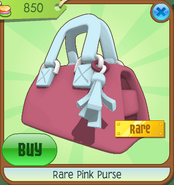 Pink Purse won from an Adventure.
Add a photo to this gallery
Retrieved from "https://animaljam.fandom.com/wiki/Pink_Purse?oldid=1254788"
Community content is available under CC-BY-SA unless otherwise noted.