60 Gems
575 Gems (Rare Item Monday)
The Pirate Sword is a non-member land clothing item that is worn on the back. It was released in 2012 as one of many possible prizes obtained when reaching the top chest in Sky High. This is also a random prize that can be found in many animal passages as well as being in certain reward chests in Adventures.

The Pirate Sword has a curved, jagged blade with nicks in it. The sword is attached to a colored leather strap with a buckle on it by another small strap as well as a hilt that is pointing upwards. This item comes in nine different varieties, including the rare variant.

The Pirate Sword can be won as a possible prize from the following locations: 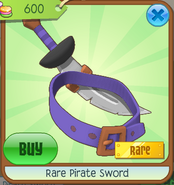 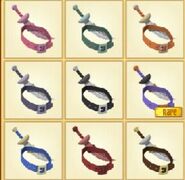 All of the Pirate Sword item icons 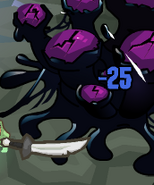 The damage done and animation in the Adventures 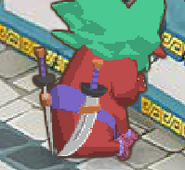 When worn on certain animals (such as the Pig, Sheep, Sloth, and Panda), all varieties of the Pirate Sword appear as two swords instead of one.

The Pirate Sword appears larger than normal when viewed in the Photo Booth on a Penguin.
Community content is available under CC-BY-SA unless otherwise noted.
Advertisement