View source
Not to be confused with the Raccoon.
For the pet counterpart, see Pet Raccoon.

The Rainbow Raccoon is very similar in appearance to the Raccoon, only it is adorned with rainbow patterns on its face, head, ears, back, legs, and tail. A small rainbow-shaped trail follows it. It also has dark green eyes and a triangular nose. 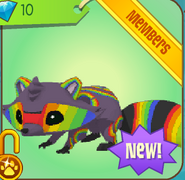 As seen in the Jamaa Journal 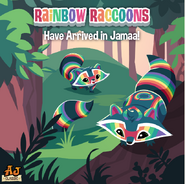 As seen in The Daily Explorer

what the color palette looks like (in the patterns) 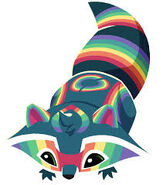 A Rainbow Raccoon glitched to have a magenta-based rainbow

A Rainbow Raccoon with the magenta glitch, but also lacking body markings

A Rainbow Raccoon with the magenta glitch and no body patterns as seen in the change animal menu.
Community content is available under CC-BY-SA unless otherwise noted.
Advertisement