875 Gems (Rare)
1,225 Gems (Rare Phantom)
The Rare Cupcake Hat is a non-member land clothing item. It was formerly sold at Jam Mart Clothing and was first released on April 1, 2013, for Rare Item Monday. On September 8, 2014, it was once again released at the same shop for another Rare Item Monday. Another variant was introduced on October 21, 2019, to celebrate the Night of the Phantoms.

The Rare Cupcake Hat is a large cupcake that sits upon a Jammer's head to be worn as a hat. The cupcake has a light blue wrapper on the bottom and white frosting on the top. The frosting is covered with sprinkles that are colored pink, light blue, and light orange. There is also a pink candle on the very top of the cupcake with a light orange flame. This item comes in only two varieties.

The Rare Cupcake Hat can be won as a possible prize from the following locations: 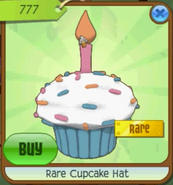 The Rare Cupcake Hat on its first release.

When worn on a seal's head. 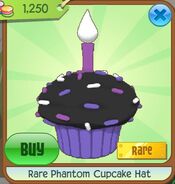 The Phantom variant
Community content is available under CC-BY-SA unless otherwise noted.
Advertisement