View source
Not to be confused with the Freedom Fox Hat or Fluffy Fox Head.

The Rare Fox Hat is a cap made to look like a fox's head. It has two button eyes stitched on with thread, two large fox ears, and a bushy fox tail with a striped tip hanging off the back. There is a small nick in one ear and some stitch marks on the top of the head. It has a pointy snout ending in a small, olive-shaped nose. It comes in eight different color varieties.

The Rare Fox Hat can be won as a possible prize from the following locations: 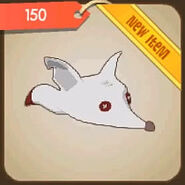 The Fox Hat when it was sold during the Beta Testing. 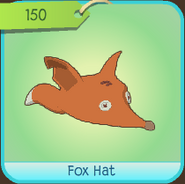 The Fox Hat when it was sold under its original name in 2012.

The original icons before June 2012.

All Fox Hat colors glitched on the Coyote.

When worn on a Sheep.

When worn on a Kangaroo.

A glitch when worn by a playing Pig.

A glitch when worn on a Coyote.
Community content is available under CC-BY-SA unless otherwise noted.
Advertisement