The Rare Lionfish Fin Armor is a members-only underwater clothing item that is worn on the legs/flippers. It was first released on February 27, 2012, in Bahari Bargains for Rare Item Monday, but it is no longer sold in stores.

The Rare Lionfish Fin Armor appears as a series of three sharp, triangular fins for each leg/flipper. In the middle of each fin is a wavy mark that is a different color from the rest of the fin. When worn it appears somewhat detached from the animal and simply floats next to their leg/flipper. This item has eight varieties. 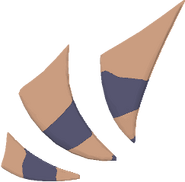 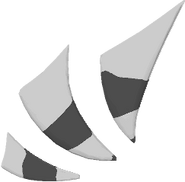 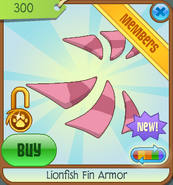 The original appearance and name when it was first sold.
Add a photo to this gallery

The white version after July 2012 with an updated view and a rare tag.

The white version before the rare tag was added.
Add a photo to this gallery
Retrieved from "https://animaljam.fandom.com/wiki/Rare_Lionfish_Fin_Armor?oldid=1255083"
Community content is available under CC-BY-SA unless otherwise noted.