725 Gems
The Rare Scary Bat Wings are a non-member land clothing item worn on the back. They were formerly sold in Jam Mart Clothing and were first released sometime during October 2010. They returned on October 7, 2013, for Rare Item Monday with an added rare tag.

The Rare Scary Bat Wings appear as a pair of bat-like wings that have black arms and three black "fingers" with one horn-like orange "thumb" at the top. Between each of the fingers and the arm is grey webbing that has a darker grey shadow near the top. This item comes in only one variety.

The Rare Scary Bat Wings can be won as a possible prize from the following locations: 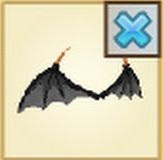 The item without the rare tag.

The glitch on Pandas when doing the "Play" action.
Community content is available under CC-BY-SA unless otherwise noted.
Advertisement