475 Gems
The Rare Scary Cat Hat is a non-member land clothing item that can be worn on the head. It was first released sometime during the first Night of the Phantoms in October 2010. It was re-released during October 2011 at the Shiveer Shoppe but went on clearance that same month. It was re-released for Rare Item Monday on March 5, 2012, in the Shiveer Shoppe with the addition of a "Rare" badge.

The Rare Scary Cat Hat is a dome-shaped cap that is all black and has two points towards the top, resembling cat ears. On the front part of the hat are two yellow stitches and two orange buttons, representing eyes. There are also two crooked, orange whiskers coming out of each side. This item comes in only one variety.

The Rare Scary Cat Hat can be won as a possible prize from the following locations: 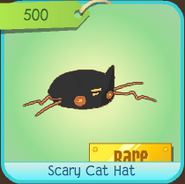 The Scary Cat Hat before its appearance and name was changed to include the "Rare" part. 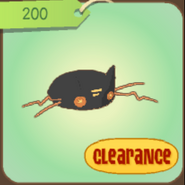 The item seen with a cheaper price during October 2011.
Community content is available under CC-BY-SA unless otherwise noted.
Advertisement