Not to be confused with the Musketeer Boots.

The Real Musketeer Boots are a members-only land clothing item that are worn on the feet. They were released in Jam Mart Clothing on July 29, 2013, as a Rare Item Monday exclusive.

The Real Musketeer Boots resemble a pair of musketeer's boots with a raised toe and a small heel. Each boot has a strap around the ankle and another strap across the arch with a rounded buckle. The top of each boot is rolled down partially and strapped with a circular buckle. There are eight varieties of this item. 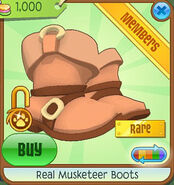 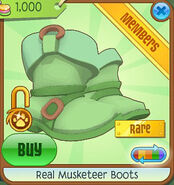 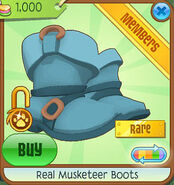 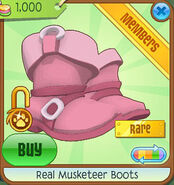 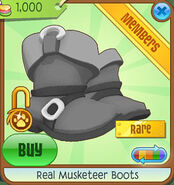 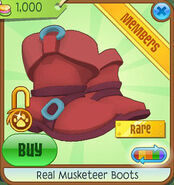 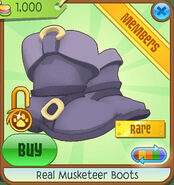 Add a photo to this gallery
Retrieved from "https://animaljam.fandom.com/wiki/Real_Musketeer_Boots?oldid=1255117"
Community content is available under CC-BY-SA unless otherwise noted.