View source
Not to be confused with the Panda or the Raccoon.

The Red Panda’s default appearance is a red fur coat, white ears and stripes that appear on its tail, and brown legs. They have black pupil-less eyes by default surrounded by white markings. The Red Panda closely resembles a Raccoon in various ways.

The strange snapshot in the Jamaa Journal hinted its arrival.

The Red Panda seen in the Jamaa Journal at the Night of the Phantoms. 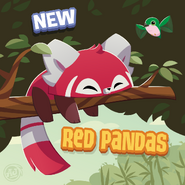 The Red Panda double-jumping at the Bounce House Den.