View source
This article is about the den. For the party based on it, see Dinner Party.

The Restaurant is a members-only land den. It was first released sometime in April 2011, at the Den Shop. It was obtainable via purchasing a membership during February 2020 and came with the Lovely Bakery Bundle. It was re-released at the Den Shop on August 13, 2020, but left on December 4, 2020. The den returned on November 4, 2021, but left on January 7, 2022.

The Restaurant Den is a bit smaller than most other dens, with only three "rooms" - one major one and two smaller ones. The rooms consist of a small waiting area with a bench and a small chalkboard beside the till, a large open area, and a complete kitchen with a sink, stoves, and ovens. There is also an outside area with a wooden patio and lights surrounding it. By default, the flooring is dark red carpeting with a swirl pattern and the wallpaper is a pale-to-dark tan. This den is set at night with stars in the sky and a crescent moon visible through a round window in the main room.

The Dinner Party, which uses a place very similar to the Restaurant Den. 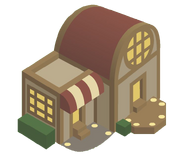 This den advertised in the Jamaa Journal.
Community content is available under CC-BY-SA unless otherwise noted.
Advertisement