View source
Not to be confused with the Rare Sequins Bow or Blackout Sequin Bow.

375 Gems
2,475 Gems (Rare Item Monday)
The Sequin Bow is a non-member land clothing item that is worn on the head. It was released during November 2016 and it can be obtained by redeeming the promo code that is bundled with the Dress Up Friends playset from the Jazwares Toys.

This Sequin Bow appears as a green hair bow that has small circular sparkles. When worn by a player, this bow also has animated, diamond-shaped sparkles that appear around it continuously. This item comes in two varieties, one of which is a Rare Item Monday. The rare variant is yellow and follows the same design of the promo version. 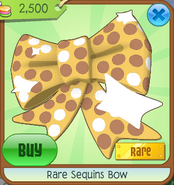 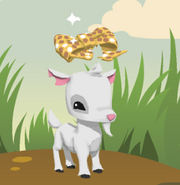 The glitch that shows up on the Goat with the Rare variant. 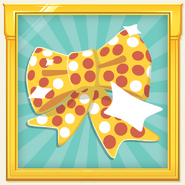 The Rare Item Monday version advertised in The Daily Explorer.
Community content is available under CC-BY-SA unless otherwise noted.
Advertisement