90 Gems
The Sewing Machine is a members-only den item. It was formerly sold at Coral Corner and was first released on March 18, 2011.

The Sewing Machine is white and consists of a red spinning dial on the side. It also has a spool of brown thread on top. This item only comes in only one variety. 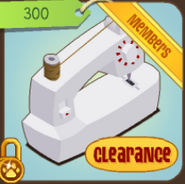 The item when it was sold at Coral Corner.

This item can be won as a prize from The Forgotten Desert. 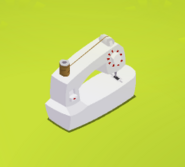 Sewing Machine placed in a Den.
Add a photo to this gallery
Retrieved from "https://animaljam.fandom.com/wiki/Sewing_Machine?oldid=1470545"
Community content is available under CC-BY-SA unless otherwise noted.