2,000 Gems
The Small House is a non-member land den that every Jammer owns by default automatically when they start playing. It was released when the Beta Testing period ended. It is one of the “smallest” dens in the game.

Outside, there is a stone patio with several shades of gray rock in it behind the house. In front of the house, there is a large patch of grass with a garden pathway made out of hard dirt and stones. The Small House consists of only one parlor room with white walls. The house has a single floor, which has brown textured stripes on it. It appears to be on a cliff with some leaves behind it and mountains in the background. The house has thick wooden beams framing its corners and sides. The roof consists of red, brown, and orange tiles that are combined to form an arch-like shape for one side and a steep triangle for the other side. 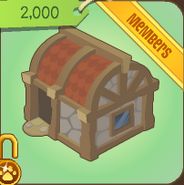 The Small House den when it was sold for members-only. 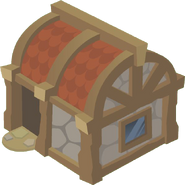 Add a photo to this gallery
Retrieved from "https://animaljam.fandom.com/wiki/Small_House?oldid=1469791"
Community content is available under CC-BY-SA unless otherwise noted.