View source
For the main shop in this place, see Sol Arcade Shop.
Not to be confused with the Sol Arcade Den.

At the South-part of Jamaa Township

Games, Sol Arcade Shop and Astronomy Shop
The Sol Arcade is a room in Jamaa Township where Jammers are able to play many of the mini-games found throughout Jamaa. It was introduced on February 2, 2012. It can be directly teleported to by clicking the spaceship-like building in the Jamaa Township section of the World Map.

The outside of the arcade is a round building with a sloped straw roof and a rocket ship entrance. The rocket ship is cream-colored with dark orange fins and nose cone. Attached to the rocket ship is a sign with a game controller symbol on it. The rocket ship has a small window cut out of its side as well as an arched doorway that leads into the arcade. There are various seasonal decorations placed around the entrance at different months of the year.

The inside of the arcade has an outer space theme with walls depicting sharp mountain peaks against a starry night sky that includes animated shooting stars. The floor is mostly orange with red and yellow circles in a retro-themed design. The arcade is full of natural rock formations and bright, animated lights that form paths between the different wooden gaming platforms.

The arcade is filled with playable versions of most of the mini-games found in Jamaa. Near the entrance is The Claw Machine and a Phantom Invasion machine can be found further down.

The announcement of this place in Jamaa Journal Volume 53. 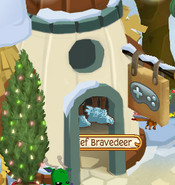 A glitch causes the player to get stuck in the doorway.

Insider entrance of the Sol Arcade 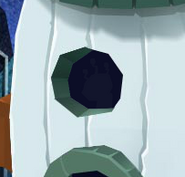 The alien-like silhouette seen in the window above the entrance.

The Sol Arcade Shop that sells the arcade machines. 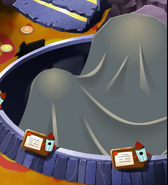 The location of the Astronomy Shop before it was introduced.

Glitch where the flooring overlaps Twister and Pill Bugs. 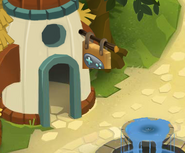 A glitch where the Sol Arcade entrance sign is cut off
Community content is available under CC-BY-SA unless otherwise noted.
Advertisement