View source
Not to be confused with the Snow Leopard.

The Spooky Snow Leopard is a members-only land animal that was released on September 27, 2018. It can be obtained by purchasing a membership during the month of October 2018 or as of October 11, 2018, in the Diamond Shop for 10 Diamonds. It released again on October 1, 2020, as part of the Chilling Black Cat Bundle. It returned on July 1, 2021, for four days, as part of the Lovely Leopards Wild Weekend sale. It returned again on September 30, 2021.

The Spooky Snow Leopard has a Night of the Phantoms-themed pattern on its body. It has swirls of black on its underbelly, toes, the edge of the tail, and surrounding the eye. It also has bats, ghosts, and pumpkins all scattered around its back, legs, and tail. Beneath its paws, there is a big swirl with bats, ghosts, and pumpkins. There is a swirl of the main color on the end of its tail, and its outer ears are a darker shade of gray than the main body's color.

A page of the Jamaa Journal featuring the Spooky Snow Leopard

The leopard's appearance on a Player Card.

The announcement in the Jamaa Journal about the Spooky Snow Leopard being released in the Diamond Shop and the Haunted Hideout Bundle.

Art of the Spooky Snow Leopard for the Haunted Hideout Bundle 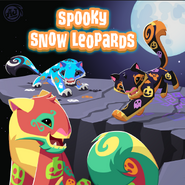 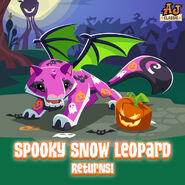 The Spooky Snow Leopard returning in The Daily Explorer.