Alphas (allies), Direwolves (allies), Phantoms (enemies)
Star is the Direwolf Alpha. They were introduced during 2018, when they were mentioned in Juno's story. They were first seen as a statue at the AJ Birthday Party and have yet to make an appearance in the Adventures.

Star appears as a normal Direwolf, with some markings on their cheeks. They are depicted with solid-colored eyes. They have thick fur and a pointed nose. They appear to be wearing a necklace similar to the Princess Necklace.

Juno's story in the Temple of the Ancients mentions Star. 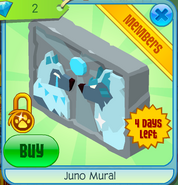 Juno (left) and Star (right), as seen on the Juno Mural item.
Community content is available under CC-BY-SA unless otherwise noted.
Advertisement