300 Gems
The Tail Belts are a members-only land clothing item. They were released as part of the Dark Moon Bundle, obtainable by purchasing a membership during October 2019. They were later released in the Diamond Shop. It was released again on October 15, 2020, but left on November 16, 2020.

The Tail Belts are belts tied together with buckles. They wrap around the player's tail. This item originally came in one variety, but it was given one more upon its release in the Diamond Shop. 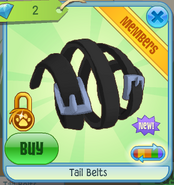 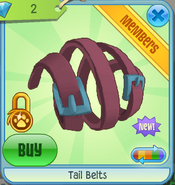