Tavie is the Alpha of the Dolphins. Her voice is only heard in the Adventure In Too Deep and has physically appeared in Turning The Tide as well as Tiki Trouble. Tavie seems to have a love for music, being the leader of an underwater band called The Jolly Oyster and notably carrying her nautilus guitar. She also has a Pet Seahorse named Rio.

Tavie is a royal purple Dolphin with a lavender underside and lavender swirl pattern. She has hot pink eyes with long black eyelashes, a lavender-colored small star-shaped patch under her eye, lavender-colored lips and lavender-colored eye-shadow. She wears a tan-colored crown with a small circular shiny white pearl in the middle of it, small lavender-colored Diamond-shaped Gems, one on each side of the pearl and a hot pink hibiscus flower at the edge on the left side of her crown. She has velvet-colored hair with aqua-blue streaks, her hair is tied up in pigtails and her hairbands are made out of purple-gray oyster clams. Tavie has a mechanical tail fin that looks similar to her crown. The tail fin is a replacement of her tail as she was born without one, and helps her to swim. The tail armor is tan-colored with sandy-colored stripes and four small diamond-shaped lavender-colored Gems.

Tavie was born without a tail fin, causing her to go on a journey looking for someone to replace it, all of this while she was leading an ocean army against the infamous Phantoms. During her journey, she met Graham and the Alphas, who saw Alpha material out of her. They possibly asked her to join them, which was accepted. 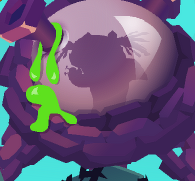 In Too Deep: Her first appearance is in this Adventure, where the Player comes across her towards the end. She is locked up in a Phantom Pipe in which case leaves her appearance unknown. Although the player cannot see her, they can still read her dialogue. She is left unguarded by Phantoms, however, the Player is forced to go for help then try to rescue her. Tavie explains to the Players that she had explored too much which caused her capture and she has been a prisoner for a fairly long duration of time. She urges the Player to escape and tell the Alphas that she is down in Phantom Factory. When the player exits the factory, Liza tells the Player that Tavie is the Alpha of Dolphins and has been traveling but never came back and was thought to be "missing".

Turning The Tide: She appears again in this adventure where she is rescued by the Player alongside the Bottlenose Brigade. At the end of Turning The Tide, she thanks the Player for rescuing her and she is seen chatting along with the other Alphas.

Tiki Trouble: She greets the Player in this Adventure and tells the Player to get three pearls which can help defend the ocean from Phantoms. After the Player collects a pearl, Tavie gives the Player an adventure prize. 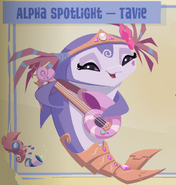 Tavie's appearance in the Alpha Spotlight 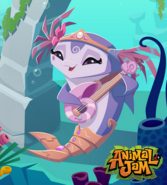 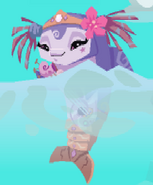 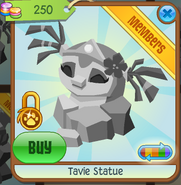 A statue of Tavie. It can be bought at Marine Marvels. 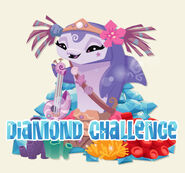 Tavie making an appearance for the Diamond challenge 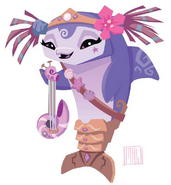 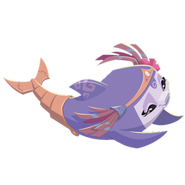 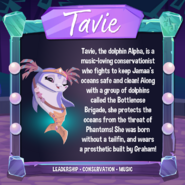 Information about Tavie in The Daily Explorer. 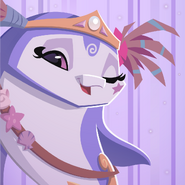 Tavie in The Daily Explorer. 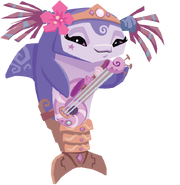 Tavie in the Adventures
Community content is available under CC-BY-SA unless otherwise noted.
Advertisement