Not to be confused with the HD Television.

The Television is a members-only den item. It was formerly sold at Jam Mart Furniture and was first released during the Beta Testing. It went on clearance during September 2011. It later was put on clearance sometime at the end of 2013.

The Television appears to be a regular screen inlaid in a notched and cracked wooden frame. The letters "SBi" are inscribed in white below the screen. When clicked on, the screen displays three animations - an animated smoothie drink, the WildWorks logo, and an animated Phantom. This item only comes in one variety. 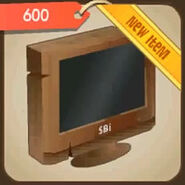 The Television was sold during Beta Testing.

This item won from The Forgotten Desert with the updated appearance

The Television item has the members-only lock. 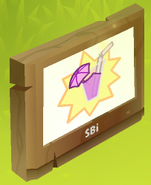 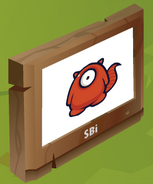 The National Geographic Kids logo, which was formerly viewable by clicking twice 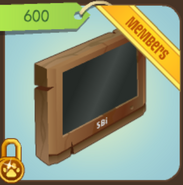 The Television being sold shortly after Beta Testing.
Add a photo to this gallery
Retrieved from "https://animaljam.fandom.com/wiki/Television?oldid=1326389"
Community content is available under CC-BY-SA unless otherwise noted.