None
The Test Room was an unreleased room that served as a place for staff members to test various gameplay features on Animal Jam Classic. It was deleted at one point but was later brought back in November 2017, only to be deleted again weeks later. It was originally not accessible legitimately, but Jammers were able to follow each other into it while playing the game normally.

The room was a large debug room, with most parts resembling the terrain of the Adventures. It was split into different sections, such as shops, adventures, mini games, parties, and more. It contained tools for the developers Animal Jam Classic.

On the top right section, there was an "Adventures" section full of "Quest" tags numbered from 1-29 representing each adventure in the game. Each quest had a game icon labeled "Start Adventure" associated with it, but nothing happened if the game icon was clicked on. In addition to these quests, there were also the "First 5" and "Tut_1" tags as well as a wave-like icon, all of which had a defunct game icon.

Next to that section was another section called "Player Parties" full of tags representing Jammer Parties. Each tag had a hidden passage to the party it represented; however, upon attempting to enter them, a popup appeared saying that the party was full.

Also next to the quests section was a shop with the tags "Accessory", "Den Items", "Coral Den", "Craft Shop", "Den Rooms", "Diamond Shop", "Carnival Accessory", "Carnival Den Items", and "Petz" surrounding it. Clicking on the shop did not bring up a shop interface.

Interspersed throughout the top right section was a Print and Play station, a label called "Grid Drawing" that had a non-defunct game icon for Pixel Painting, and a "Night" label that attempted to lead to the Night of the Phantoms version of Jamaa Township but was defunct.

In the middle section, there were fences similar to the Rare Snow Fence but without snow. These fences marked two sections: an "Employee Corrals" section and a "Mini Games" section.

The "Employee Corrals" section included the tags "Andrew", "Wayne", "Elvir", "Laura's Lair", and "Peter". These tags all had a hidden passage that attempted to lead into another room; however, the "Andrew" tag was the only one that was functional, and it led to Andrews Room of Doom. Additionally, "Laura's Lair" had two defunct game icons.

The "Mini Games" section included the tags "Cotton Candy" (Cotton Candy Machine), "FastFoodies" (Fast Foodies), "TrueFalse" (Best Guess Game), "Astronomy" (Temple of Trivia), "Candy Catch" (Candy Catch), "Dunk-A-Phantom" (Dunk-A-Phantom), and "Pacman" (Hedge Hog). There was a non-defunct game icon for each tag, and they opened up the games that the tags corresponded to.

On the bottom left section, there was a cluster of various interactable items. There was a T-Shirt poll, a Call of the Wild poll, a phantom cage, a Pet Bat that could be purchased when clicked on, a Nesting Cosmo Doll that expanded when hovered over, two Panda banners, a Phantom Vortex portal, a Candy Bowl that gave out candy Holdables, a globe banner, a glitched Summer Carnival banner, an Earth Day banner, and an Eggstravaganza nest. The Summer Carnival banner attempted to lead there when clicked on, but the loading screen would stay forever.

A version of the test Room, where what was the "Andrew" section recently was the "Rose" section

Astronomy as seen in the Test Room in a similar design to Temple Of Trivia. 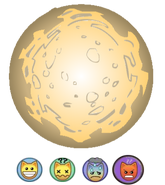