View source
This article is about the item. For the game, see The Claw.

990 Gems
The Claw is a members-only den item and a den version of the mini-game The Claw. It was released during August 2011 as one of the Monthly Member Gifts.

The Claw appears as a typical claw machine that is made of wood and bamboo poles. It has a wide, brown base with five gems slot and three buttons. The top of the system has a tall box with a bamboo frame and clear windows on the sides that reveal unidentifiable Plushies inside. The system is decorated on the front with a large animated game controller icon at the base and several colored dots on a band at the top. This item has only one variety.

The The Claw can be won as a possible prize from the following locations: 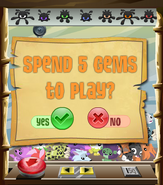 This version's appearance when played

The Claw item shown with its golden rare tag 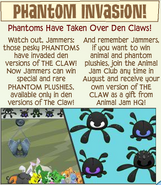 An advertisement of this item in Jamaa Journal Volume 40. 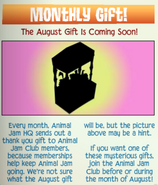 The Claw being hinted in Jamaa Journal volume 39.

The Claw being announced as the next Monthly Member Gift in Jamaa Journal volume 40 and 41.
Community content is available under CC-BY-SA unless otherwise noted.
Advertisement