The River's Heart is an Adventure available to all Jammers. It was released on February 1, 2018, and the portal to this adventure is in the Forgotten Archive in Temple Of Zios. On June 7, 2018, the original adventure was modified slightly and a "hard" mode was introduced.

The following rewards can be obtained by finishing the adventure:

Location of every animal passage in this adventure:

Description and guide to the animal passage:

There are a number of additional prizes that can be obtained from various treasure chests:

Locations of those treasure chests:

An advertisement for The River's Heart in the Jamaa Journal 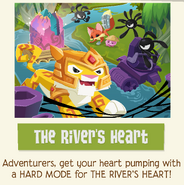 The announcement for the hard mode

Greely in the grass 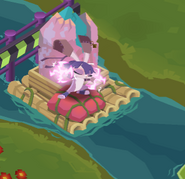 The full map of the first part.

The full map of the second part. 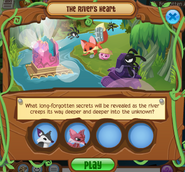 The adventure start pop-up.
Add a photo to this gallery
Retrieved from "https://animaljam.fandom.com/wiki/The_River%27s_Heart?oldid=1469846"
Community content is available under CC-BY-SA unless otherwise noted.