Not to be confused with the Golden Tiara, Queen Bee Tiara, Classic Tiara, or the Magenta Tiara.

75 Gems
775 Gems (Rare Item Monday)
The Tiara is a non-member land clothing item that is worn on the head. It is sold in Jam Mart Clothing and was originally released during Beta Testing. It was put on clearance on April 17, 2018, and left stores on April 27, 2018.

The Tiara appears as a fancy crown fit for a princess or a queen. The tiara is curved into a crescent shape and has swirling patterns with a diamond-shaped gemstone embedded at the top. There are eleven varieties of this item, eight of which are available in the shop, one of which was sold for Rare Item Monday, and two of which are non-rare and unavailable in shops. 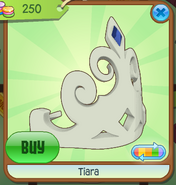 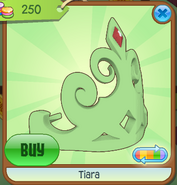 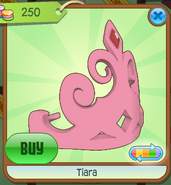 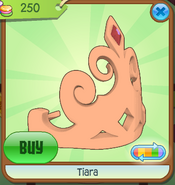 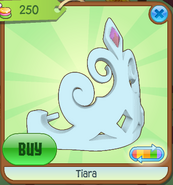 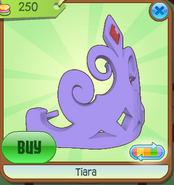 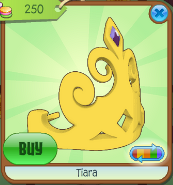 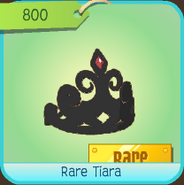 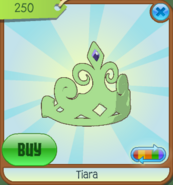 The "beta" green Tiara with purple gem is no longer available.

The "beta" white Tiara with red gem is no longer available.

The other beta tiara that has a milky color with a purple gem.
Add a photo to this gallery

The "beta" green Tiara with the new artwork. 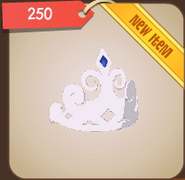 This Tiara was sold in Jam-Mart during the beta stage.

Former glitch that occurred when worn on a Sabertooth

A side by side comparison of the 'milky tiara' and the 'regular tiara'.

A glitch that occurs when worn on a tiger while dancing.

A fully magenta variant that was not released into the game
Add a photo to this gallery
Retrieved from "https://animaljam.fandom.com/wiki/Tiara?oldid=1468452"
Community content is available under CC-BY-SA unless otherwise noted.