Tunnel Town is an app that was developed by WildWorks in collaboration with National Geographic Kids. It is a spin-off from Animal Jam and it is available to download for free on Android and iOS devices.

In Tunnel Town, the player can help the bunnies of Jamaa build a secret underground empire. They can dig new tunnels and chambers, then decorate them with toys and furniture their bunnies will really use. The player can even hit the dance floor with different bunny combinations to discover amazing new species.

Bunnies can be purchased from the Marketplace, but the other way to obtain bunnies is to breed them. The breeding process involves placing two bunnies on the Dance Floor furniture item. A list of potential bunny types will then be presented along with a toggle of a feminine or masculine appearance for the resulting bunny. Once the breeding has started, the bunnies must remain on the Dance Floor until an egg is ready, at which point it can be hatched to reveal the resulting breed.

Every player has a level that indicates their progress in the game. A player can level up by collecting XP, which can be obtained by completing goals. Gaining higher levels will unlock more space for bunnies (up to a maximum of 30 slots), more slots for farmland, greater chance of breeding rare bunny types, and it will also open up deeper digging capability to expand the burrow.

As the player progresses through the game, they will receive goals that can be completed to gain XP and either Stars or Gems. The primary goals are to hatch one of each rare bunny type. There are also numerous secondary goals such as: collecting certain bugs (which appear in the dirt around the burrow); buying, selling, or growing certain foods; placing certain furniture items. Sometimes you may have to buy items with real money to level up quicker.

Every bunny has an energy level that increases as the bunny's actual level increases. The energy level determines how long a bunny can perform digging and mining actions. A bunny's energy can be restored by feeding it food or placing the bunny on furniture that recovered energy, such as a bed or a chair. The food can either be purchased or grown in the farmland at the surface of the burrow.

There are two types of currency in this game: Gems and Stars. Gems are used to purchase most basic bunnies, food, and furniture, but Stars are required to purchase special goods including all of the special bunny types. Gems can be obtained by mining gemstones, receiving daily rewards, or completing certain goals. Stars can be obtained by completing goals, receiving daily rewards, or receiving gifts from friends. Both game currencies can also be obtained with real money via in-app purchases.

Players can use their bunnies to dig out dirt for a custom burrow layout. They can also fill dirt back in as desired. When digging, there are five layers of sediment that take progressively longer to dig out the deeper down they are. Initially, only the top layer is accessible, but more layers are unlocked as the player gains levels. If the player digs out a gemstone, they can assign bunnies to mine it for Gems. The types of gemstones are as follows:

The social side of this game is mainly tied into Facebook. Players can invite friend friends to play and add them through this social media service. There is very little direct interaction available between friends, but they can visit each others burrows and gift each other Stars. 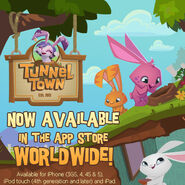 An advertisement for the app

An image from the Tunnel Town Trailer

Concept art for the trailer by Taylor Maw 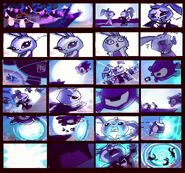 Storyboard for the Tunnel Town trailer by Taylor Maw