View source
This article is about the adventure. For the music, see Twists and Turns (Music).

Twists and Turns is the second seasonal Adventure accessible for all Jammers and is available for the month of November. It was first released on November 6, 2014, and it returns every year during the Feast of Thanks.

1. The player will start at the entrance of a maze, where they will need to work their way pass the different section of the maze.

2. The maze is separated into different themed sections that will change depending on the type of maze, which may include the following, hay bales, cornrows, fences and sunflowers. In the maze's sections, they will run into three colored chests and keys: red, blue, and green. The keys can be used to unlock the same colored chests, which award 250 Gems each.

3. There is a large treasure chest with a prize at the end of each sections, containing one non-member prize and one members-only prize. At the third treasure chest, there is a portal to leave the Adventure.

Chest at End of 1st section

Chest at End of 2nd section

Chest at End of 3rd section

This passage is located near the center of the maze in the corn rows section and can only be opened by Kangaroos.

As well as the three main treasures, there are also three hidden chests, one in every area, that contain certain clothing items.

The Twists and Turns Banner used until 2017. 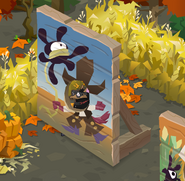 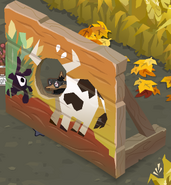 The map of the adventure

The image of the area where donuts can be found.