The Vanity And Mirror consists of a wooden structure with a flat surface, mirror, and two drawers, one above the other. On the top, is dark blue vase with a white stripe on its neck containing yellow and white flowers, and a light green purse. This item comes in only one variety. 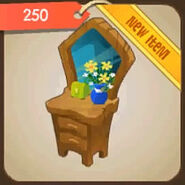 The Vanity And Mirror item was sold during Beta Testing.
Add a photo to this gallery
Retrieved from "https://animaljam.fandom.com/wiki/Vanity_And_Mirror?oldid=1256144"
Community content is available under CC-BY-SA unless otherwise noted.