Not to be confused with the Spring Viking Hat.

The Viking Hat is a members-only land clothing item worn on the head. It was originally released in Jam Mart Clothing during Beta Testing. They were re-released for Rare Item Monday on March 12, 2012.

The Viking Hat appears as a short helmet with a set of large and small horns shooting out of either side. The horn on top is shorter, while the one on the bottom is longer. The horns curve similar to a bull's horns and are a different color at the tips. The helmet has a coloured band on it, with three visible bumps. This item comes in eight different color varieties.

All Viking Hat variations before 2012 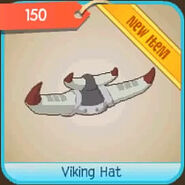 The Viking Hat sold during Beta Testing.
Add a photo to this gallery