Not to be confused with the Upside Down Sconce.

The Wall Torch is a cone-shaped reddish-brown holder with a greenish-brown grip that can be attached to a wall with a greenish veritcal stone. It has an animated orange and yellow fire at the top, which is constantly flickering. This item comes in only one variety. 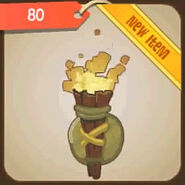 This item when it was sold during the Beta Testing period.
Add a photo to this gallery
Retrieved from "https://animaljam.fandom.com/wiki/Wall_Torch?oldid=1256177"
Community content is available under CC-BY-SA unless otherwise noted.