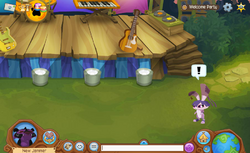 The Welcome Party is a special party that New Jammers used to be taken to after they completed the tutorial. This party cannot be accessed from the regular Parties menu. It was first introduced in November 2016 and was later removed on March 30, 2017. Instead of being taken to the Welcome Party, New Jammers are now sent straight to their dens upon finishing the initial tutorial.

This party is based on the Jam Session party. It has the same stage with instruments and a similar background. The primary difference is that the right side of the party has a path that leads to Jamaa Township. The Bunny Alpha, Peck, stands near the path to help guide New Jammers.

Just like the Jam Session party, the stage in this party is interactive and changes when more Jammers dance on it: first the stage's lights start changing colors, then the strobe lights at the top start moving, and finally the lights in front of the stage will burst into flames and the curtains in the back of the stage will light up with laser artwork of animals. The stage also includes interactive instruments that play short music clips when clicked. To the left of the stage is the Clothing Shop, a small shop that sells non-member clothing items.