The WildWorks Mascot Plushie appears to be an exact copy of Blinky, the WildWorks mascot, as a plushie. It is a reddish-orange colored monster with horns, a striped tail and one eye. This item comes in only one variety. 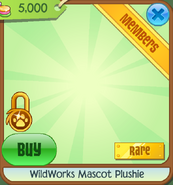 The item while it did not have an appearance.
Community content is available under CC-BY-SA unless otherwise noted.
Advertisement