The Window is a members-only den item. It was first released during Beta Testing and is sold in Jam Mart Furniture.

The Window consists of a round, medium-brown wooden frame. There is a small twig in the corner with two green leaves hanging off of it, an indentation in the wood beneath the twig, and two wooden bars crossed at the opening of the window, tied at the center. Shown through the windowpane is the sky with animated white clouds skimming past. This item comes in only one variety. 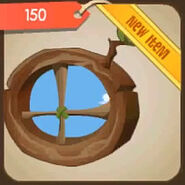 The Window was sold during Beta Testing. 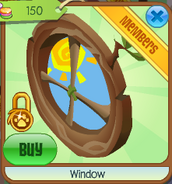 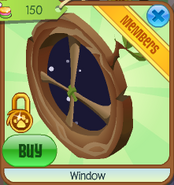 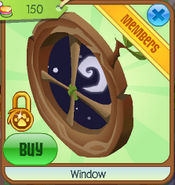 clicked three times
Add a photo to this gallery
Retrieved from "https://animaljam.fandom.com/wiki/Window?oldid=1256224"
Community content is available under CC-BY-SA unless otherwise noted.