View source
For the shop found inside this party, see Wolves Only Shop.

The Wolves Only Party is a party that is for all Jammers with either a Wolf, Arctic Wolf, Direwolf, or Snowflake Arctic Wolf. This party was first introduced on March 12, 2012. It is a party that is available year-round. It can be accessed through the Party list and comes on multiple times a day. 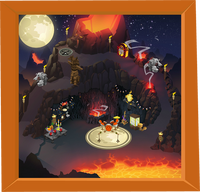 This party is set in a modified Volcano Den that has an extra added pathway leading from the top of the volcano around the right side, and down to the lava pit. The party is decorated with some Night of the Phantoms-themed items, some wolf-themed items, and other moon items. Some of the decorations include the Wolf Totem, Trapped Phantom, Greely Statue, and Tiki Torch that line the pathway up to the volcano. The main floor is decorated with the Wolf Sconce, Spooky Lights, and Wall Torch. Along the walls the Drum Set, Bongo Drums, and Microphone are in a band area on the right. The Candelabrum, Tea Cup, and Fruit Bowl are on a table to the left.

This party has the Wolves Only Shop located on the main floor that sells wolf-themed den items, some of which are used as decorations in the party. Also on the main floor is The Wolf Claw where Jammers can obtain various colored wolf plushies. At the very bottom of the party is a lava pit that acts the same as the den version: it will turn the player red when they go near it. At the top of the volcano is a giant full moon that when clicked on, will give the player a mini full moon Holdable Icon to carry around.