Not to be confused with the Spring Worn Blanket.

The Worn Blanket is a non-member clothing item that is worn on the back. It was first released on October 4, 2010, and was formerly sold at Jam Mart Clothing until it went on clearance early in 2011. It returned around the end of 2011 as one of many prizes in Sky High and later became available as a possible prize at the end of certain hard mode Adventures.

The Worn Blanket is a thin, ragged piece of fabric with holes mostly around the center. The item has a large hole in the front with two smaller tears along the edges. It is torn in some areas as well. It is shown to drape over the Jammer's back when equipped. This item comes in ten different varieties, two of which are rare variants. 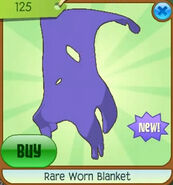 The Rare Worn Blanket sold at the Leap Year Party. 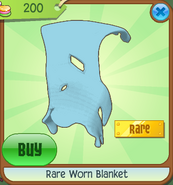 Rare Item Monday
Add a photo to this gallery

All (current) Worn Blankets
Add a photo to this gallery